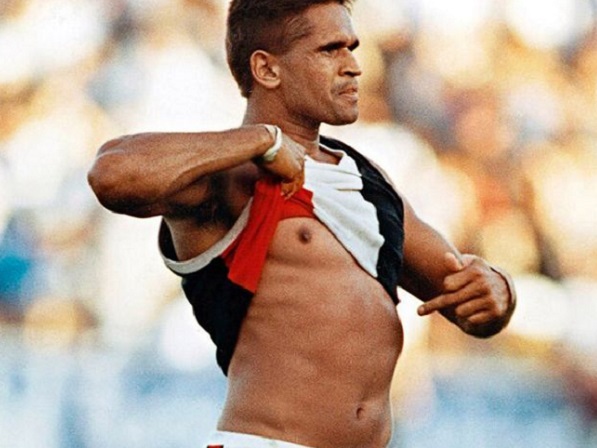 Nick Winmar is a retired Australian rules footballer, best known for his career for St Kilda and the Western Bulldogs in the Australian Football League (AFL). He spent 12 of his 13 year career with St Kilda, where he won the club’s best and fairest award, the Trevor Barker Award, twice in 1989 and 1995.

Winmar possessed remarkable talent with speed, silky skills and could slot into just about any position. He played as a forward, being the Saints’ leading goal-kicker in 1988, across the centre and as an attacking half-back flanker. He had an ability to excite, enthral, and come up with the unexpected every game he played. Whether it was a spectacular, high-flying mark, a goal from the boundary or a fierce and aggressive hard-hitting tackle.

Nicky Winmar was the first Aboriginal footballer to play 200 games in the AFL and was named in the Indigenous Team of the Century in 2005. He was involved in several incidents of racial vilification during his career and a photograph of Winmar responding to one such incident during the 1993 season has been described as one of the most memorable images in Australian sporting history. This picture has now been immortalised in the form of a statue in front of the Optus Stadium in Perth.