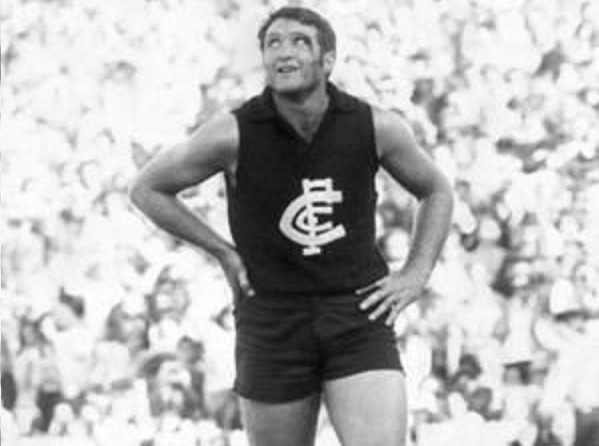 John Nicholls was one of Australian football’s finest ever players. He was the first Carlton footballer to play 300 games for the Blues, and was declared the club’s greatest player after he won the Robert Reynolds Trophy for Carlton’s best and fairest player on five occasions: 1959, only his third season, and then in 1963, 1965, 1966 and 1967.

At 189cm you wouldn’t have thought it, but Nicholls played most of his football as a ruckman. His lack of height was made up by imposing physical presence, strength and intimidation. A steely glare from those intense blue eyes across the centre circle intimidated many opponents. And if a game became overtly physical, and more than insults started flying, the Carlton boys stood tall when Nicholls was there to fly the flag. He could control a game, and he had an intense hatred of being beaten. If he had to flatten someone, he would.’

He was the only ruckman at the time who could match and battle the greatest ruckman in the league, Graham Farmer. He was not blessed with the supreme all-round skills of a Graham Farmer, or the mountainous height of a Len Thompson, nor yet the fearsome aggressiveness of a Jack Dyer, Nicholls was nevertheless consistently able to outmanoeuvre opposing ruckmen of all physical types and attributes. He knew how to use his abilities and physique to the best possible effect.

Besides being named as one of the twelve inaugural “Legends of the Australian Football Hall of Fame in 1996, Nicholls was also named in the AFL Team of the Century, as the resting ruckman in the back pocket, with Graham Farmer taking the first ruck position.