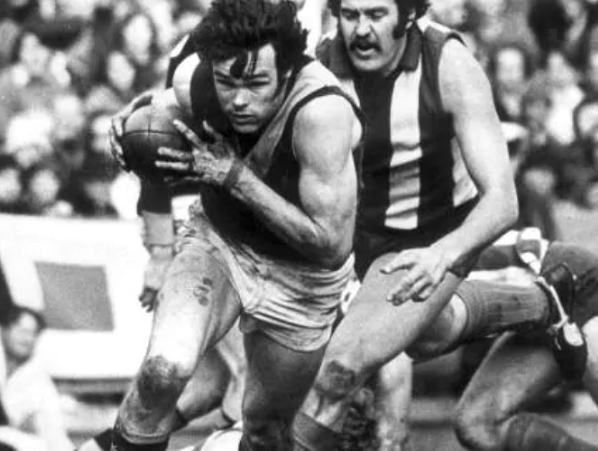 One of Richmonds greatest ever footballers, Francis William Bourke, was one of the key figures to provide so much success to the club between his playing years of 1967 til 1982. Affectionately known as ‘Saint Francis’, Bourke is a five-time premiership player who was honoured with selection in the AFL’s Team of the Century.

Recruited from Nathalia, Francis Bourke overcame a heart murmur to become one of Richmond’s greatest ever players – quite an accolade when you consider the number of out-and-out champions whose names grace the Punt Road honour board. Bouke Initially started his career as a wingman but later moved to defence where his courage, pace, anticipation and refusal to be beaten made him excel at the game.  Francis was a good kick and able to use his strength to gain the best position in marking duels. He was not afraid to run off opponents and was a sure ball handler when the ball was on the ground. He possessed excellent judgement and was rarely caught out of position. He also trained the way he played, as well as putting in many extra hours of training to finely tune his skills. Only Kevin Bartlett and Jack Dyer have played more club games than Francis’s 302.

Following his retirement, Bourke coached Richmond to the 1982 Grand Final, which was disappointingly lost against arch rivals Carlton. When the side slumped to 10th place the following year, Bourke’s brief VFL coaching career came to a peremptory end, but no coach since has managed to steer the Tigers beyond the preliminary final. He later spent some time at Melbourne, as a specialist coach, returning to Richmond as Chairman of Selectors in 1992, only to resign at the end of 1994 after his son, David, was drafted under the father-son rule and made his senior debut in Round 2 of 1995.