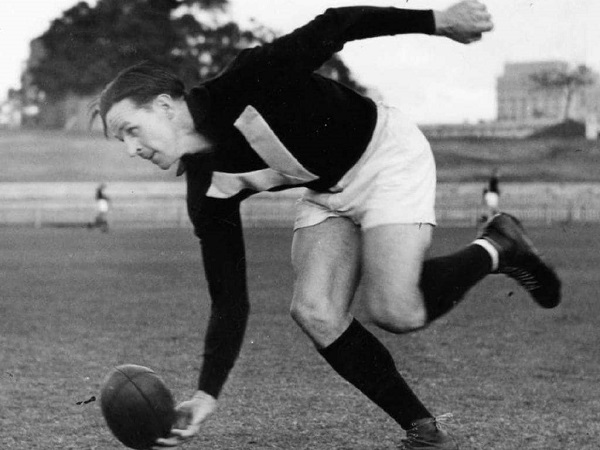 Reynolds was one of the greatest players to ever play the great game of Australian rules football club and one of the best rovers the game has seen. He went on to play an astonishing 320 games for the Essendon football club, a record surpassed only by Simon Madden, and it was the League record until 1974.

Reynolds is one of four footballers to have won three Brownlow Medals, the others being Haydn Bunton, Sr., Bob Skilton and Ian Stewart. This record alone places him into an echelon above most others that have played the game.

He had no fear about going in to get the ball and his weight enabled him to compete with bigger players and often out mark them. His balance and ball sense made him a real artist and he was renowned for his superb dash away from packs. He could run close to the ground at full speed.

King Richard’ took over as joint coach with Harry Hunter and at the end of the year he was appointed captain-coach at the age of 25. Under his reign, Essendon went on to win premierships in 1942,1946,1949 and 1950. For five years after he took over, the Dons were never out of the four. This was an incredible turn around for a team that had been down for so long. The Dons were runners-up in 1941,1943,1947 and 1948. As well, they were third twice and only twice out of the four.

His 27 final appearances have been surpassed at the club only by Bill Hutchison. He kicked 51 goals in finals, more than any Essendon player. He also played in six preliminary finals and 10 grand finals, the equal club record.

In 2004, a statue was made in his honor during the 2004 Parade of Champions at the Melbourne Cricket Ground.