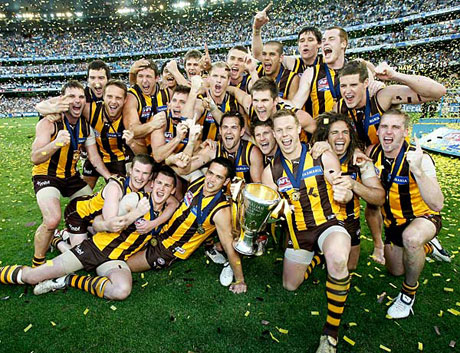 The 2008 AFL Grand Final was contested by the Geelong Cats and the Hawthorne Hawks. The Geelong cats entered the game as clear favourites, dominating the competition all year, winning 21 of the 22 games during the home and away season. With both teams in red hot form, this Grand final showdown was highly anticipated by all interested parties.

Hawthorn and Geelong were evenly contested for most of the game, locked in a mighty arm wrestle until late in the third quarter, when the Hawks started to exert their dominance over the game. The last quarter saw some some magnificent creative plays led by Cyril Rioli, Mark Williams and Stuart Dew kicking a number of match winning goals to seal the win.