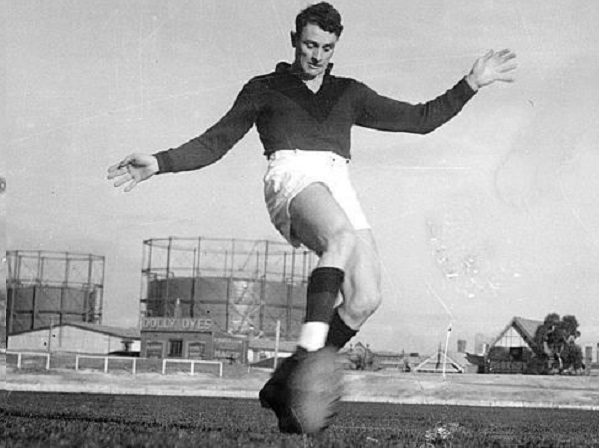 Haydn Bunton is a legend on the game and known as one of the greatest footballers Australia has known. In his career spanning 11 seasons, between 1931 and 1941, Bunton won the prestigious Brownlow medal (for the best and fairest player) three times, and the WAFL’s top honour Sandover Medal three times. Bunton was consistently a great of the game as he the only player to have averaged one Brownlow vote per game over his career.

During his playing career, Bunton was considered by fans of the sport as gentleman of the game as a player of integrity, who rarely if ever engaged in unduly rough play. Playing mainly as a rover, he averaged close to 30 kicks a game. Just like Gary Abblet Jnr in the modern game, he to had great balance, ball handling skills and the freakish ability to avoid bumps and tackles. He was possessed of all the offensive skills in the book and his extraordinary fluidity and grace of movement made him a delight to watch.

World War Two put a sudden end to Bunton’s career at the time, preventing what might have been even greater success. After the War hwe did manage to return to Fitzroy briefly in 1942, but officially hung up the boots just two matches later.

A brilliant runner and ball-winner, he was regarded by some historians and observers of Australian rules as its greatest-ever player. Sadly, his life was cut too short at just 44 years of age when he was tragically killed in a car accident in 1955. But in Australian Football, and at the Brisbane Lions, the Legend of Haydn Bunton will forever live on. In 1996, Bunton was named at left forward pocket in the AFL Team of the Century, and was made an inaugural legend in the Australian Football Hall of Fame.