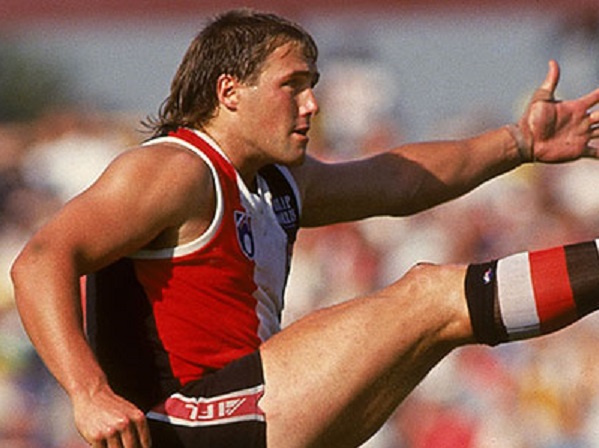 Tony Lockett  was an Australian rules football player who played for both the St Kilda Football club and Sydney Football club between the years of 1983 till 2002. Lockett is one of the greatest full forwards of all time and is the highest goalscorer in the history of the VFL/AFL with 1,360 goals.  This record will stand for some time now with the only current player that is the closest to this is Lance Franklin who is currently in the 900’s.  Lockett’s size and strength helped him muscle out defenders and stand his ground in marking contests. The combination of his toughness and aggression, strong hands, speed, high leap and accurate kicking made him a champion full forward and an unstoppable force to his opponents.

The Brownlow medel is typically won by on ballers who rack up the possessions but Lockett defied this possibility and became the first and only full forward to ever win the Brownlow medal in 1987. He has also achieved the Coleman Medal on 4 occasions and kicked more than 100 goals in a season on six occasions. In 1999, Lockett broke the all-time goals record when he kicked his 1300th goal, surpassing Gordon Coventry’s record of 1299 which had stood for 62 years.

Locket was inducted into the AFL Hall of Fame in 2006 and was elevated to legend status in 2015.

Tony Locket was a one of those players that everybody loved to watch and will be remembered as the greatest goal kicker in AFL history.

One thought on “Tony Lockett”