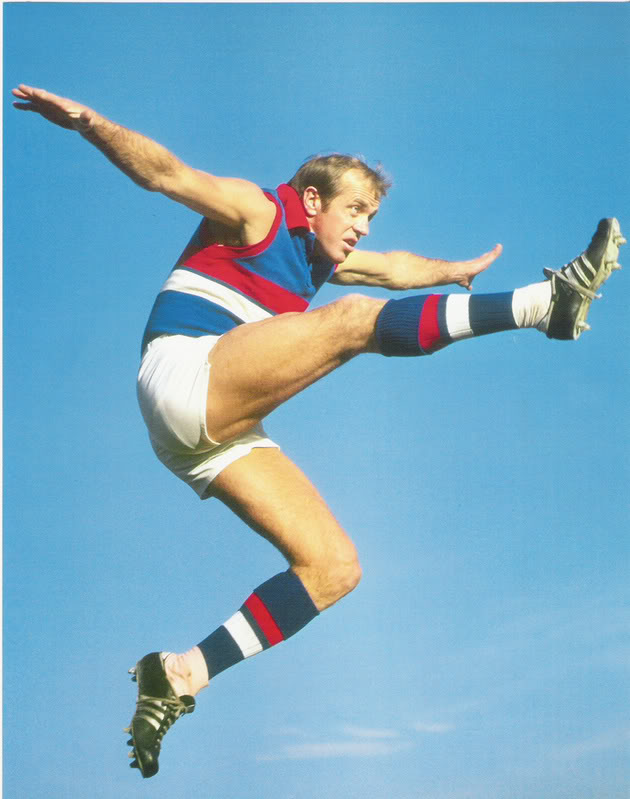 Ted Whitten was a legend of the game who played for the Footscray football club in the Victorian Football League (VFL) and is recognised as one of the game’s all-time greatest players. Whitten was a player, coach and media personality for well over a quarter of a century and gave everything he had to the great game.

Nicknamed “Mr. Football”, Whitten represented everything great about the game of Australian rules football. He was admired not only for his footballing abilities, but his showmanship and larrikin streak and was the reason spectators viewed the game. Ted Whitten made his VFL debut in 1951 and on that day joined a special group of players by kicking a goal with his first kick. He went on to fulfil a long and fulfilling career with the Footscray Football Club as a key position player in the centre half forward or centre half back positions.

In recent time Taylor Harris, an extremely skilful player currently playing in the AFLW league, has become a symbol of a perfect kicking technique. Ted Whitten was this example in his generation and was made famous and synonymous for his perfectly executed drop punt. He also held pride in all facets of the game with superb all-round skills, along with the extraordinary talent of being able to kick equally well with his right and left foot, a flawless mark” and unequalled ground and hand skills not ever seen in the league at that time. He played in Footscray’s first VFL/AFL premiership in 1954, and ended his senior career in 1970 having playing an astonishing 321 games. Western Oval, the Footscray Football Club’s home ground, was renamed Whitten Oval in his honour for his valuable service to the club.

Apart from club-level football, Whitten was a significant exponent and promoter of State of Origin, representing his state in 29 matches. His enthusiasm for State of Origin football is marked by the E. J. Whitten Legends Game, a charity match held annually since 1995.  After retiring as a player, Whitten turned to coaching, and continued to contribute to the game as a popular commentator and media personality.

Ted “Mr Football” Whitten was among the first batch of inductees into the Australian Football Hall of Fame and was immediately elevated to Legend status. At the same time, he was selected as Captain of the AFL Team of the Century.