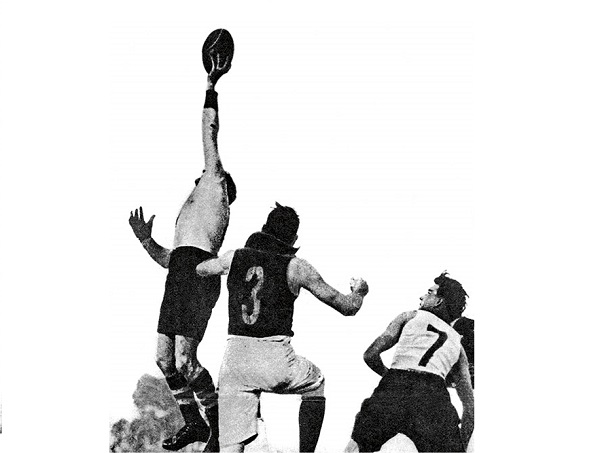 Roy Cazaly was a legendary figure of Australian football in the early 1900’s and was considered one of the greatest players during this era. He played for both the St Kilda football club and South Melbourne football club during the years of  1911 and 1927. When at south Melbourne, a team mate by the name of, Fred “Skeeter” Fleiter, would often yell “Up there, Cazaly” which is now one of the most famous catch phrases synonymous with the AFL today.

Cazaly was more than just a brilliant aerialist, he was a symbol of sports professionalism.  He did not smoke, or drink and was always at peak physical condition. This enabled him to play over 400 senior games in Victoria and Tasmania. He is known to have been the oldest player to have ever competed in the league finally hanging up the boots at the age of 48. Cazaly could punt or drop kick 70 yards with tremendous accuracy and he took a special delight in the running drop kick. He could take a fingertip mark, turn a complete circle, land and keep running without missing a single step. Cazaly was also an extremely smart footballer which not only made him a great footballer but also one of the greatest coaches of all time. While coaching Hawthorn, he was reported to have given the club its nickname the “Hawks” on the suggestion from one of his daughters.  He saw it as tougher name than their original nickname the “Mayblooms”. In 1996 he was inducted into the Australian Football Hall of Fame and elevated to Legend status.