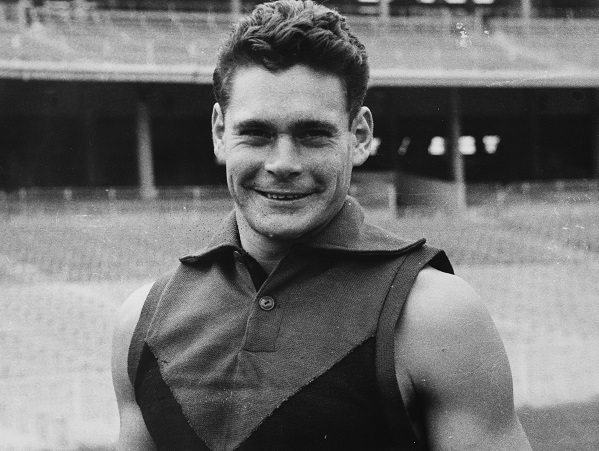 Ronald Barassi Jr  became famous for his illustrious and somewhat legendary career by not just playing but also becoming an extremely successful coach in the VFL/ AFL between the years of 1953 and 1995. His father Ron Barassi Sr, also a an exceptional Australian rules footballer playing for the Melbourne football club reserves, was killed at Tobruk during World War II. The young Barassi spent his latter teenage years living with Norm Smith, coach of the Melbourne Football Club and a former teammate of his father. The combination of the legendary Coach Smith and Barassi took Melbourne to new heights guiding the Demons to the Grand Final in 1954, losing to Footscray, but then going on to win the flag in 1955, 1956 and 1957, lost to Collingwood in 1958, and then won again in 1959 and 1960 with Barassi as captain.

To ensure he played with the Demons, Melbourne went to the VFL and successfully lobbied for the creation of a father–son rule to allow clubs preferential recruiting access to the sons of players who have made a major past contribution to the team.

Barassi’s coaching career was both successful and regarded by many as revolutionary. He was a hard on both on himself and his players and demanded the most he could from everyone around him. He was a strategic coach who by many critics referred his coaching as ground breaking and played a big part in the evolution of the game as it is seen today.

Barassi was one of the most determined players ever to play the game, He did not know how to accept defeat. His attack on the football and inspired leadership made him a football great. He took that passion for the contest into his coaching, willing his players to perform at their best.