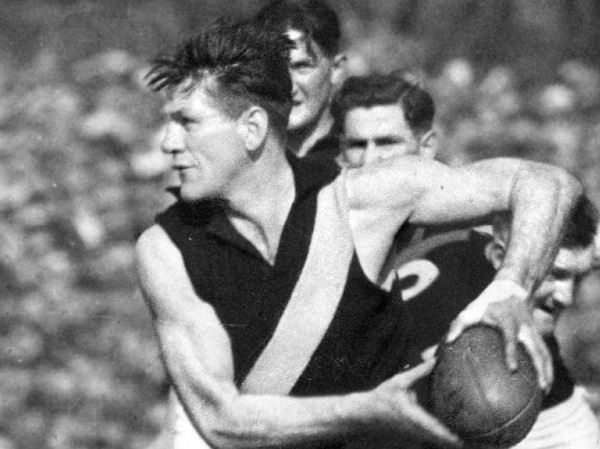 Australian Rules footballer Jack Dyer was one the the finest players of his generation. For a ruckman he was remarkably fast and his marking and kicking ability were like no other in the game. Some players achieve greatness in the game because of their skill and some were great because of their sheer toughness and attack on the football. Jack Dyer was a special individual to excel at both of these facets of the game. He made great use of the crunching hip and shoulder, but throughout his 312 games Jack was only ever reported once.
He was nicknamed “Captain Blood” after a game against Fitzroy in which he flattened three players and showed how physical the game could be played. How legal his actions would be in today’s game would be questionable.

Dyer had a great sense of humour and well loved within the football community. Jack Dyer once famously uttered “I won’t say anything in case I say something” but thank goodness he didn’t always follow that advice. He is famous for a number of other quotes including – “I want you to pair off in threes.” ,“Fitzroy just copulated the opposition.”, “Bartlett’s older than he’s ever been before.” and “Lou (Lou Richards) hasn’t got any enemies … but his friends don’t like him.”

Jack Dyer was one of 12 inaugural “Legends” inducted into the Australian Football Hall of Fame. He later turned to coaching and work in the media as a popular broadcaster and journalist. There is absolutely no doubt that Dyer was one of the greatest players of his generation. He sadly passed away on August the 23rd, 2003. His death was a loss for the entire VFL / AFL world and his achievements will continue to inspire players for generations to come.