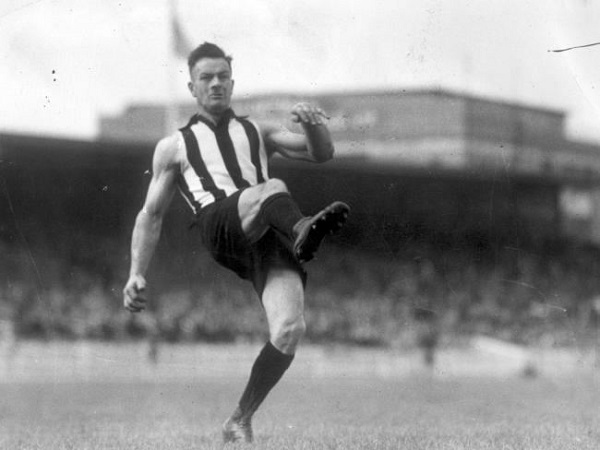 Gordon Coventry is a legend of the game of Australian rules footballer who played for Collingwood Football Club in the Victorian Football League (VFL) between the years of 1920 to 1937. Coventry was a record setter becoming famous for the first player to kick 100 goals in a season and the first player to reach 300 games. The most impressive record Coventry reached was becoming the first player to ever kick 1000 career goals overall, with his total of 1299. This accomplishment has only been reached by 4 other players in history. This impressive career goal kicking record of 1299 was held until 1999, when it was surpassed by Tony Lockett.

Unlike most full forwards who used their aerial skills and speed off the mark to win possession and kick goals, Coventry used a combination of his strength and clever reflexes to stand his ground and mark the football. He could easily win the football in close contests close to goal and beat his opponents.

He started his football career for Collingwood in 1920 playing almost exclusively at full-forward and quickly became the leading forward in the competition. Coventry led Collingwood’s goal kicking in 1922, and would go on to lead the club’s goal kicking for 16 consecutive seasons, until his retirement in 1937. He also led the VFL’s goalkicking on six occasions: each year from 1926 to 1930, and then again in his final season. An inaugural inductee into the Australian Football Hall of Fame, and a member of Collingwood’s Team of the Century, He is often considered by fans and media personalities to be amongst the greatest forward-line players of all time