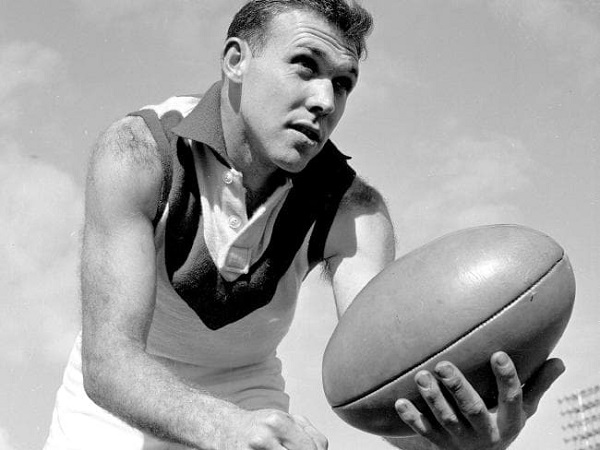 Robert “Bob” Skilton was not the tallest Australian rules player but was by far one of the toughest and most skill-full. Skilton was particularly fast and was a master at fooling opponents with dummy’s and side steps, allowing him to evade opponents when necessary. He was always first to the ball and attacked the ball with such verocity. Its not surprising that in his 16-year career he suffered many injuries, including concussion, a broken nose four times, a broken wrist three times and 12 black eyes.

One of Skilton’s greatest assets was the ability to kick with both feet, a skill he learned at the insistence of his father, and developed by spending hours kicking the ball against a wall, collecting it on the rebound and kicking again with the other foot. It was impossible to say whether he was right or left footed, since his left foot gave greater accuracy, but his right greater distance. He had arguably the most accurate stab kick in the game.

Skilton lived and breathed the South Melbourne football club playing in their senior side between the years of 1956 and 1971. Playing as a rover, Skilton is one of only four players to have won the Brownlow Medal three times; in 1959 (when he tied with Verdun Howell), and in 1963 and 1968.

His skills were the best in the game and his ability to find and use the footy was unmatched. A fair ball player, he embodied many of the game’s finest traditions.