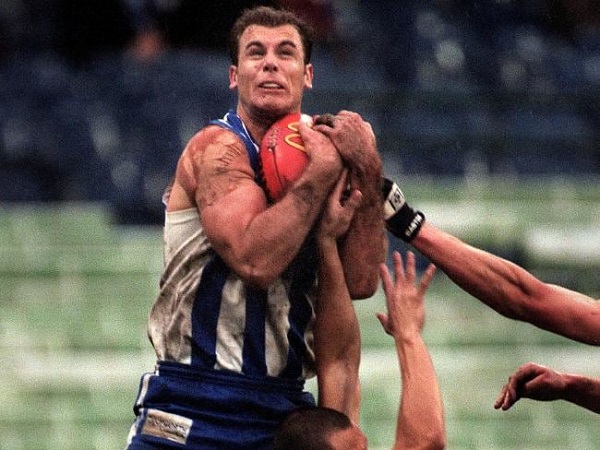 Wayne Carey is most famous by his time at North Melbourne from 1989 through till 2001. Carey was a powerfully built forward who could stand his ground against any component and also a great aerialist taking marks strongly even under the most extreme pressure. Carey had a swagger and confidence about him and the way way he walked earned him the nickname ‘Duck’ from early in his career. This is one of the most famous nicknames in footy but for most football fans the origin is usually unknown.

Carey’s strong marking and ferocious attack on the ball is his greatest asset. Most legends of the game will have a list of accolades but individual performances like Gary Abblet’s 9 goal haul and strong performance in the 1989 Grand final is what elevates these players to legend status. For Carey’s it was his 11 goals, 15 marks and 31 possessions against Melbourne which is highly debated as matching Ablett’s legendary performance which is labelled being one of the greatest performances of all time. Among many peers and media commentators such as Leigh Matthews, Carey has been singled out as the greatest player to have ever played the game.

Carey is a dual-premiership captain at North Melbourne, four-time North Melbourne best-and-fairest (Syd Barker Medallist) and seven-time All-Australian. Carey was inducted into the AFL Hall of Fame in 2010.