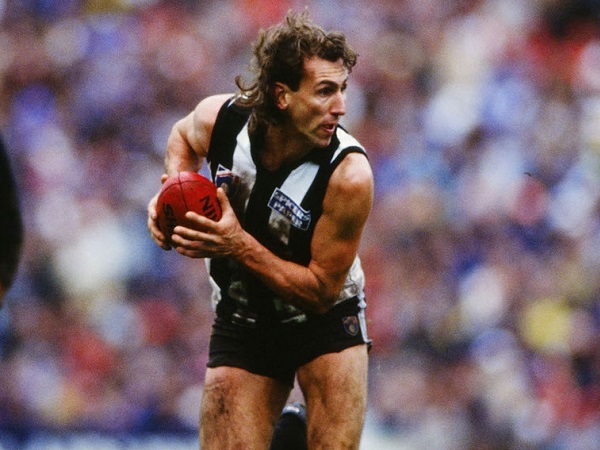 Peter Daicos played his entire 250-game Australian Rules Football career with the Collingwood Football Club in the VFL/AFL.   Peter was a highly skilled football in all facets of the game and was most famous for his freakish ability to kick goals from any angle or distance. With a towering torpedo or dribbling the ball along the ground or even while being slung in a tackle, Daicos could kick a goal from anywhere.  With his short legs Peter had a very low centre of gravity and this was perfect for out positioning taller, more physical defenders.  Often thrusting out one hand and scooping in a mark just as miraculous as any of the great goals he scored.

Daicos is regarded as Collingwood’s all-time greats, being named in the club’s Team of the Century, leading the club’s goal kicking for five seasons, winning the best and fairest twice and playing in the club’s drought breaking 1990 premiership. Even though he played in the mid-field for most of his career, his exploits and goal kicking strength up forward puts him in the same class as some of the greatest forwards to have ever played the game. During his 250-game career his league honours include a premiership, and kicking the Goal of the Year and being selected to represented his home state of Victoria a total of five times.