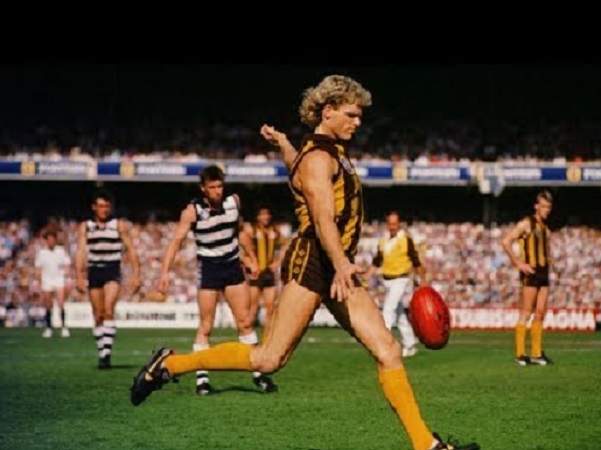 Dermott Brereton  is an  former Australian rules football player in the Australian Football League (AFL), regarded as one of the greatest players of his generation. He played for 3 different clubs but spent most of his career with the Hawthorne Football Club where he kicked the majority of his 464 goals and played in five premierships.

Don’t let the long blond permed hair & coloured boots fool you, Brereton was one of the toughest & most controversial players ever to play the game of Australian Rules Football. Brereton was known for his aggressive hip and shoulder bumps on running players. This style of play was frowned upon and his reckless method led to the introduction of the charging rule to protect players whose intention was to focus on the ball.

Between the years of 1982 and 1992 Dermott Brereton played 211 senior games for Hawthorn, winning a best and fairest award in 1985. He was a member of premiership teams in 1983, 1986, 1988, 1989 and 1991, and represented Victoria in state of origin matches nine times, gaining an All Australian selection once. Most AFL players dream of playing in a premiership side. Brereton had the opportunity to play in 5 premiership sides for Hawthorn which is a remarkable feat only few will achieve. One grand final in particular worth noting is the 1989 grand final where he was famously shirt fronted at the beginning of match, playing on despite breaking his ribs. He finished his playing career at the Sydney Swan before finally moving to Collingwood. Following his football career, Dermott has forged a successful career as a television presenter, football commentator, newspaper columnist and radio host.

Few if any players today come close to matching either the ferocity with which he attacked the football, or the level of dedication which he conferred on the Hawthorn cause.