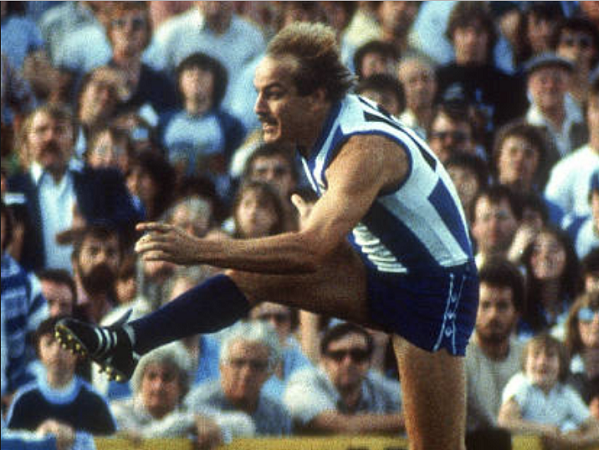 Back in the day when the VFL was seperate from the SANFL it took a special footballer to become famous and recognised as one of the best players to have ever played in both Leagues.  This marvel went by the name of Malcolm Blight.

Malcolm Blight  is had the opportunity to play for both North Melbourne in the Victorian Football League (VFL), and Woodville Football Club in the South Australian National Football League (SANFL) during the 1970s and 1980s. Blight was one of few players to have won the Brownlow Medal (Best and fairest in the VFL) and the Magarey Medal (Best and fairsest in the SANFL), and so far the only player to have kicked 100 goals in a season in both the VFL and the SANFL. With these honours, Blight is rightly regarded as one of Australia’s greatest-ever footballers.

Blight was known as a consistently great footballer who played at an elite level every time he took to the field. Along with taking spectacular marks, he was also a prolific goal kicker, with his trademark ability to kick the torpedo punt. In 1982, Blight won the Coleman Medal for leading the VFL in goal kicking, and led the Kangaroos’ goal kicking four times during his career.

Not only was Malcolm Blight one of the greatest to have played the game but he will also be known as one of greatest coaches. After proving himself the most successful coach in Woodville’s brief history, he took on the challenging task of coaching the Geelong side who were stuggling at the time.  He managed to take the Geelong football club to three grand finals, before returning back to South Australia to take on the coaching role with the Adelaide Crows who he successfully steered to 2 premierships. His achievements with the Adelaide Crows is what makes him one of the greatest coaches in history and to the Adelaide Fans he will be immortalised.

Blights success as a player and his professionalism on and off the filed will be a source of inspiration for many players for years to come. His coaching contributions he made with the Adelaide Crows has been immortalised in form of Malcolm Blight Medal. Blight was made a member of the Australian Football Hall of Fame in 1996 and was elevated to Legend status (the highest honour which can be bestowed onto an Australian footballer) in 2017